Our Mission is to operate a business that reveals the splendour and wonders of this very special place we call home. We strive to educate and excite all who visit and to create a legacy of conservation to preserve the places we love for future generations. Our ultimate aim is to reinvest into the local community and the environment that we live and work in.

As a business that showcases the natural environment, Pennicott Wilderness Journeys works hard to minimise its environmental footprint.  All of our tours are 100% carbon offset and our energy use, water consumption and waste output are measured through the internationally recognised EarthCheck system.  Pennicott Wilderness Journeys consistently exceeds EarthCheck's global best practice level across all indicators.

This page outlines some of the key initiatives and programs we undertake.

Pennicott Wilderness Journeys has been 100% carbon offset through Greening Australia.  Over the past seven years the business has contributed over $350,000 which is being spent on biodiversity restoration across Tasmania. The company’s contributions have helped Greening Australia to plant over 200,000 trees. The current project is a 1,000 hectare restoration near the township of Ross in Tasmania’s Midlands. Invasive plant species are being removed and replaced with natives. The plantings not only store carbon, they link critical habitat to allow birds, bandicoots, bettongs and other wildlife to move across the landscape. Find out more here.

“The sites are not only sequestering carbon dioxide well in excess of the CO2 emissions of Pennicott Wilderness Journeys, they are also restoring degraded landscapes in Tasmania, and providing cutting edge research data on carbon yields above ground and below ground, biodiversity impacts on climate change and restoration ecology in the highest priority landscapes in Tasmania. Your annual contributions have been highly significant as an example of support and private investment in all our grant application and proposals.” Jonathan Duddles, CEO Greening Australia.

To date, the business has contributed $160,000 to enable important island restoration projects to be undertaken by the Tasmanian Parks and Wildlife Service.

Tasman Island - The first of these was undertaken on Tasman Island in 2010, where a population of feral cats were eradicated.  The island is home to Australia's largest colony of Fairy Prions and cats were killing around 50,000 seabirds per year.  This project has been declared a success and is now in a monitoring phase.  Results have shown that Fairy Prion and Shearwater numbers have increased remarkably and some bird species not seen on the island for decades are returning, such as the Lewin's Rail.  In March 2015 a team of Pennicott Wilderness Journeys staff visited the island to assist in the ongoing monitoring of short-tailed shearwaters.

Pennicott Wilderness Journeys also supports a number of Tasmania's "Friends Of" groups through sponsorship and donations of cruise tickets for fundraising. 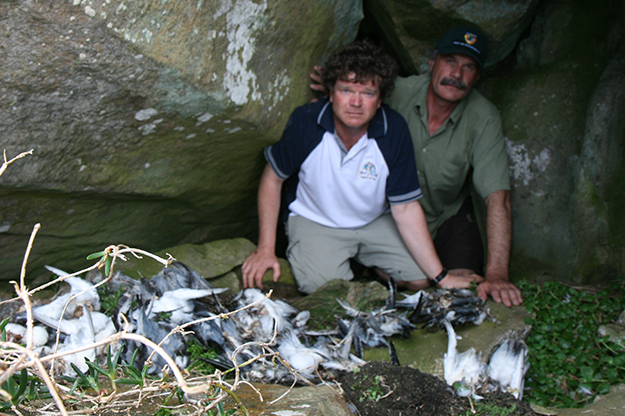 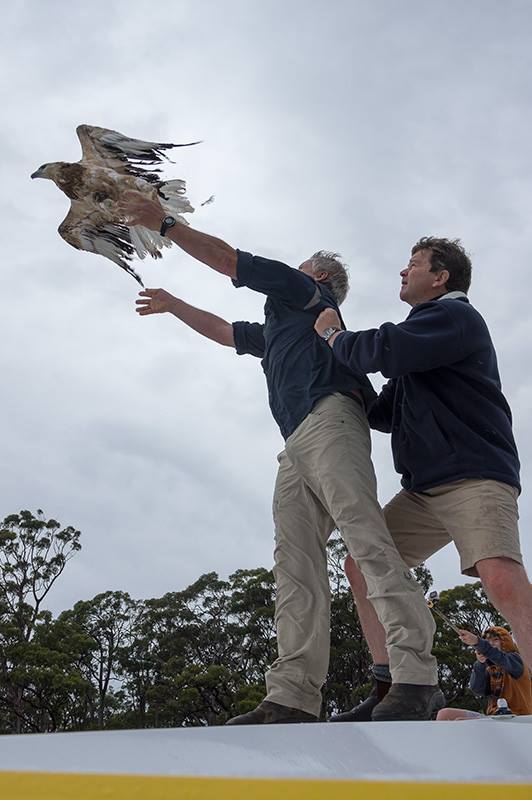 We are also involved in supporting important wildlife conservation programs.  These include:

Marine Conservation Program - Pennicott Wilderness Journeys crew genuinely care about the wildlife that call our waters home.  Our crew are sensitive around wildlife and assist conservation by reporting sightings to the Marine Conservation Program. In late 2015 our crew freed a humpback whale tangled in marine debris and in February 2016, Bruny Island Cruises assisted in the successful release of a stranded dolphin.

Fleshy-footed Shearwaters - the Pennicott Foundation has funded research by the University of Tasmania into ensuring the long-term resilience of Australia's vulnerable population of fleshy-footed shearwaters.

Save the Tasmanian Devil Program Appeal - the Pennicott Foundation has contributed directly to the important efforts to vaccinate devils against the deadly facial tumour disease.

South West Marine Debris Cleanup - we are a major sponsor of the annual South West Marine Debris clean up. In 2016 a team of 20 volunteers collected 80,694 items weighing over 2 tonnes from remote Tasmanian beaches.  Students from primary schools across Australia followed the journey online through the Bookend Trust's Expedition Class program, with a daily blog being posted from one of the volunteers.  This is just one of the many real world conservation/education partnerships supported by the Pennicott Foundation. Check out their blog or follow the journey on Expedition Class.

Friends School Beach Cleanups - each year Pennicott Wilderness Journeys also spends three days taking groups of Grade 9 students from The Friends School to clean up beaches around Bruny Island.  This hands-on experience is part of their school camp program.  This year students removed over 2 tonnes of rubbish, which was catalogued, sorted and analysed.  In addition to the fantastic conservation outcomes, the memories of this experience will stay with these students for the rest of their lives.

SKAL Beach Cleanup - in 2015 Pennicott Wilderness Journeys began a partnership with the SKAL Club of Hobart to provide opportunities for tourism industry professionals to volunteer a day to cleanup beaches.  The next beach cleanup will be 30th April.